Interview with the artist David Bowen about Growth Modeling Device

“This system uses lasers to scan an onion plant from one of three angles. As the plant is scanned a fuse deposition modeler in real-time creates a plastic model based on the information collected. The device repeats this process every twenty-four hours scanning from a different angle. After a new model is produced the system advances a conveyor approximately 17 inches so the cycle can repeat. The result is a series of plastic models illustrating the growth of the plant from three different angles.” 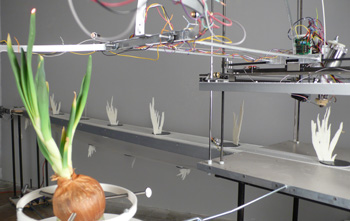 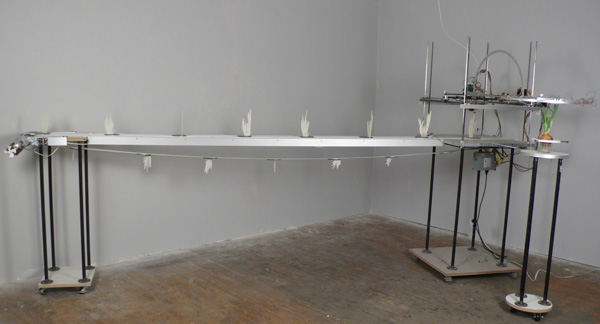 Similar to this artwork is one of Bowen’s other works, Growth Rendering Device (2007, below right) which involves 2-D printing of a plant’s growth progression on paper.

Both Interactive Plant Growing (1993) and Telegarden (1996) are related to Bowen’s work as they are involved in plant life and the growth and development of plants. Interactive Plant Growing virtually simulates plants that are actually present at the installation. They also progress but instead of prototyping the plants their real time evolution is simulated in virtual space. In Telegarden growth of the plant is not duplicated or simulated but influenced. Participants on the internet are able to get involved in nurturing a real plant garden. In short, the three artworks combined duplicate, simulate and interact with plant life.

Michael Rees expresses his love for Rapid Prototyping in Rapid Prototyping and Art (1998). Michael Rees stresses the possibilities and instant similarity of the Rapid Prototyping technology, “[t]he most unbelievable claim I made to my art dealer is what is most true about this technology: WYSIWYG – What You See Is What You Get. If you can imagine the form and describe it in a CAD program, it can be build, done.”. In the case of Growth Modeling Device, the technology is not used for rapid prototyping but more as rapid reproduction or rapid surrogate creation.