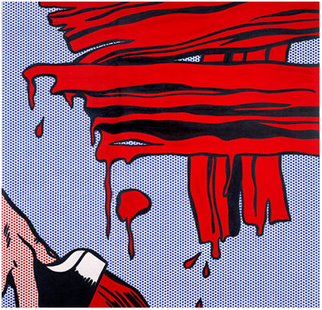 Taking the ideological cluster of gesture, authenticity and originality as his foil, in the mid-1960s, artist Roy Lichtenstein caricatured the abstract expressionistic brush-stroke in a cartoon style with a background comprised of Ben-Day dots – a commercial printing technique used by newspapers to reproduce cartoons. Paradoxically, he initially mocked this eviscerated but iconic signifier in a series of unique paintings, only later reproducing them as serigraphs.

Prior to producing his first Brushstrokes work, Lichtenstein spun his upcoming work as a “satirical send-up of Abstract Expressionism” by saying: “I’m thinking now of doing something on Abstract Expressionism…The problem there will be to paint a brush stroke, a picture of a brush stroke…Purposely dripped paint and things, you know, where the drips are actually drawn drips that look like drops of water drawn by a commercial artist.”[1]

As Diane Waldman has noted, the source for the first Brushstrokes work was a comic strip:  Dick Giordano’s Strange Suspense Stories 72 (October 1964) published by Charlton Comics.