In this video, Eliasson describes “Beauty,” part of a large one-artist exhibition at the Museum of Modern Art in New York and SF MOMA in 2008, The MOMA.org Interactive Exhibitions: Take Your Time: Olafur Eliasson (2008), website, offers extensive video and photographic documentation of Eliasson’s installations in the exhibition (including this video), and is highly recommended.

“As we move around on space, the degree of the rainbow changes, if we don’t look the
degree would also not be there, so there would be no rainbow.” Olafur Eliasson

Rafael Lozano-Hemmer’s Vectorial Elevation is “an interactive art project originally designed to celebrate the arrival of the year 2000 in Mexico City’s Zócalo Square. The website www.alzado.net enabled any Internet user to design light sculptures over the city’s historic centre, with eighteen searchlights positioned around the square. These searchlights, whose powerful beams could be seen within a 15 kilometers radius, were controlled by an online 3D simulation program and visualised by digital cameras. A personalised webpage was produced for every participant with images of their design and information such as their name, dedication, place of access and comments. These web pages were completely uncensored, allowing participants to leave a wide variety of messages, including love poems, football scores, Zapatista slogans and twenty-seven marriage proposals. In Mexico, the project attracted 800,000 participants from 89 countries over the course of its two-week duration.”[1]

The artist notes that “Vectorial Elevation alludes to Sol LeWitt’s “art of instructions” as well as László Moholy-Nagy’s paintings by telephone in 1922. Another precedent was the teleoperation of the Lindbergh searchlight in Los Angeles in 1928, activated when President Coolidge pressed a telegraph key at his desk at the White House.” [2]

The following video includes extensive documentation of the project’s concept, technical aspects, including web-based interface and robotic spotlights, and installation, narrated by Lozano-Hemmer.

The artist’s website offers even more documentation of the work in various sites, including videos from Lyon and time-lapse images from Vancouver

[1,2] Text, image and video from: http://www.lozano-hemmer.com/vectorial_elevation.php

The video shows the first part of a documentary by www.parsmedia.com in which Olafur Eliasson work is introduced. The artist gives explanations about his aesthetics concerns while conceiving some of his works that where on his exhibition “Notion Motion” at the Boijmans van Beuningen in Rotterdam.

Upon invitation to reflect on the notion of transparency, that led me into the forest to envelop the contour of a large stone with fragments of mirror.  The large stone, tucked away deep in the woods, became a reflective surface for its surroundings.  In this play of splintered radiance, the rock disappears in its reflections. Because it reflects one cannot be mislead by its presence, yet we cannot seize it, rather it is the rock that reflects us. [Artist Statement]

“British artist Anthony McCall (born 1946) has a cross-disciplinary practice in which film, sculpture, installation, drawing and performance overlap. McCall was a key figure in the avant-garde London Film-makers Co-operative in the 1970s and his earliest films are documents of outdoor performances that were notable for their minimal use of the elements, most notably fire.

After moving to New York in 1973, McCall continued his fire performances and developed his ‘solid light’ film series, conceiving the now-legendary Line Describing a Cone, in 1973. These works are simple projections that strikingly emphasise the sculptural qualities of a beam of light. In darkened, haze-filled rooms, the projections create an illusion of three-dimensional shapes, ellipses, waves and flat planes that gradually expand, contract or sweep through space. In these works, the artist sought to deconstruct cinema by reducing film to its principle components of time and light and removing the screen entirely as the prescribed surface for projection. The works also shift the relationship of the audience to film, as viewers become participants, their bodies intersecting and modifying the transitory forms.

At the end of the 1970s, McCall withdrew from making art. Over 20 years later, he acquired a new dynamic and re-opened his ‘solid light’ series, this time using digital projectors rather than 16mm film. Through his involvement in expanding the notion of cinema, which enabled a more complex experience of projection, McCall has become a hero to a younger generation of artists working with film and installation.”[1]  Between You and I is an example of McCall’s more recent work, using new technologies to build on prior concepts and practices.

“A renewed interest in his work has resulted in many screenings of his individual projections at museums and galleries internationally, as well as inclusion in major group exhibitions, such as Into the Light: the Projected Image in American Art, 1964-77, Whitney Museum, New York, 2001-02; X-Screen: The Expanded Screen: Actions and Installations of the Sixties and Seventies, Museum Moderner Kunst, Vienna, 2003-4; Expanded Cinema: Film as Spectacle, Event, Performance, Hartware Medien Kunstverein, Dortmund, 2004; Eyes, Lies and Illusions, Hayward Gallery, London, 2004; The Expanded Eye, Kunsthaus Zürich, 2006, and Projections: Beyond Cinematic Space, Hamburger Bahnhof, Berlin, 2006-07.”[2]

Video of Olafur Eliasson talk at the TED conference on February 2009. The artist introduces some of his works and his main motivations for doing art.

‘For End Around, Turrell transformed the main gallery of the museum into a Ganzfeld, the term refers to an undifferentiated and evenly illuminated space first described in perceptual psychology. In a Ganzfeld, depth, surface detail, and color variation are suppressed and in their place one sees a thick, all-encompassing mist of light. End Around is an immersive “sensing space,” an intense experience of a field of light, in which light, so often thought of as the illumination that reveals objects, becomes instead an object of weight and mass.‘ [2] ‘It is a subterranean installation that will feature a view of the sky altered by L.E.D. lighting effects, and that highlights changing light and weather conditions outside. (…) The sculpture will be sited in a grass-covered hill in the Osher Sculpture Garden. Viewers will walk through a short tunnel cut into the hill, and then enter into a cylindrical space carved out of the hill. The retaining walls of this cylindrical space will be white concrete and the floor will be red stone. At the center of this cylindrical space will be a rough-hewn, black basalt stupa form. Entering the round stupa through a door, viewers will sit on a stone bench that runs around the circumference of the skyspace and view the sky through an oculus cut in the roof of the chamber. Viewers’ perceptions of the sky color will be subtly altered by an L.E.D. lighting system inside the chamber, and by changing light and weather conditions outside the chamber.‘ [2] ‘At the time he made these, Turrell was not long out of university, where he studied experimental psychology. It was at this time he enrolled in art college, and began playing with light, which he projected into the corners of rooms to create floating cubes with the illusion of three-dimensionality.‘ [2]

‘James Turrell’s work involves explorations in light and space that speak to viewers without words, impacting the eye, body, and mind with the force of a spiritual awakening. Situated near the Grand Canyon and Arizona’s Painted Desert is Roden Crater, an extinct volcano the artist has been transforming into a celestial observatory for the past thirty years. Working with cosmological phenomena that have interested man since the dawn of civilization, Turrell’s crater brings the heavens down to earth, linking the actions of people with the movements of planets and distant galaxies. James Turrell is featured in the Season 1 episode “Spirituality” of the Art21 series “Art:21—Art in the Twenty-First Century”.’ [1] Video produced by the Itaú Cultural Institute. Abraham Palatnik talks about his work. His first Cinechromatic Art Machine presented in the First International Biennial in Sao Paulo (in 1951) is mentioned in the video.

The development of a cybernetic sculptor: Edward Ihnatowicz and the senster

Abstract: Edward Ihnatowicz (1926-1988) built one of the world’s first computer-controlled robotic sculptures, The Senster, in 1968-70. Rather than concentrate entirely on this groundbreaking and influential piece of work, this paper describes the stages he went through in developing his ideas, as an illustration of how a conventional artist became a cybernetic sculptor.

SAM was the first moving sculpture which moved directly and recognisably in response to what was going on around it. It was exhibited at the ‘Cybernetic Serendipity’ exhibition which was held initially at the Institute of Contemporary Art in London in 1968 and later toured Canada and the US ending at the Exploratorium in San Fransisco.[1]

For more information: http://sciarts.org.br/obras/atrator/index.htm (In Portuguese)

Images of the installation:

Interview with Rosangella Leote about the art work:

Text about  the installation “Atrator Poético” made by the Brazilian group SCIArts and presented during the temporary exhibition Cinético Digital (‘Digital Kinetic’) at the Itaú Cultural Institute in São Paulo, Brazil.

An interview with James Turrell held by Richard Whittaker on February 13 in 1999. It is available at http://conversations.org/story.php?sid=32. Below the introduction to the interview is presented.

‘It was thanks to artist Walter Gabrielson that I was able to get in touch with James Turrell. Gabrielson is an old friend of Turrell’s from Pasadena and, like Turrell, also a pilot. The prospect of meeting the artist was quite exciting and arranging it took some patience. Michael Bond, who managed Turrell’s projects around the world, was encouraging. He sent me to Los Angeles to look at one of the artist’s pieces in a private collection there, The Second Meeting, and eventually I found myself on my way to Flagstaff, AZ. The time I spent studying Turrell’s work had only increased my sense of his unique place in the art world. I met the artist at his studio on his ranch some thirty miles outside of Flagstaff.‘ [1]

Turn your speakers off and hear with your eyes!

Wilfred’s work was purposely silent in order to allow the visual “music” to be experienced without confusing it with sound.  The video gives the mistaken impression that there was or is a sonic element in the work.

Opus 161 is one of Wilfred’s finest works. “A Wilfred Lumia work is a composition of light, color, and form which changes slowly with time. It exhibits a very wide range of light intensity and a broad spectrum of delicate colors and shapes. These are extremely difficult to record and impossible to “play back” with fidelity, even using a high quality monitor. Thus you cannot experience the full, almost visceral, impact of his work unless you see it in person.”[1]

In 1959, Otto Piene created the work Light Ballet, which annouces his concern with the elements.

”By elements, I do not only mean the classic Greek elements: fire, water, air and earth. I also mean the human elements of action, reaction, involvement, participation.”[1]

Here is the viedo of Light Ballet which was exhibited in Op Art exhibition at Frankfurt,2007

Here are some pictures of Light Ballet from the book “Art and Electronic Media”. 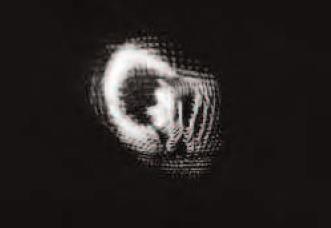 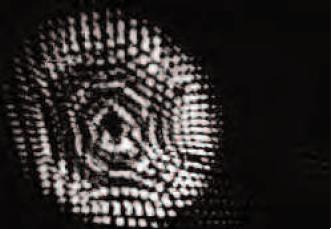 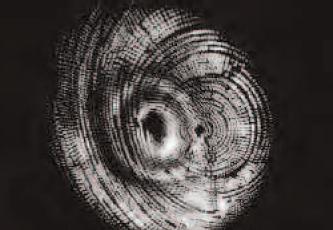 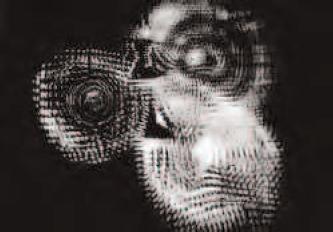 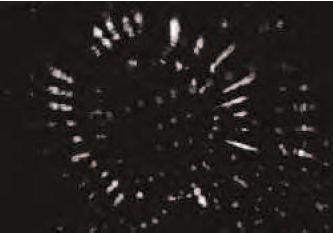 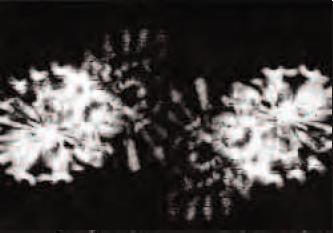 In most of his Tatsuo Miyajimas works, numbers and the sequence of them play an important role. As a central artefact of civilization and a metaphor for life and death, the ongoing and repeating number / time sequence is represented with seven-segment displays and the more and sometimes less obvious disclosure of circuitry.

In his Model series, number 100 shows green lit lcd modules, seemingly arranged in a strict checkered way. As the visitor approaches, he will eventually recognize a flicker in his sight until he finds out, that those displays are not anymore just aligned on a flat plane, but outreach into the room before the visitor. He will recognize the different that each display has its own plane in space and is not anymore connected to the other displays in some general geometric order. The strong and ordered appearance from afar changes into a fragile, almost chaotic accumulation of individual elements.