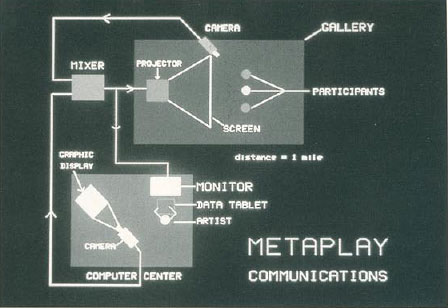 In Metaplay Krueger tries to concentrate on the interactive possibilities of the computer.

He creates a Closed-Circuit video installation where he uses a projector instead of the common TV-screen. By using a projection, the audience should be immersed stronger, as almost the whole view of sight is filled by the projection. This setup, using a projection and a computer, is widly used in later responsive environments.

The interaction happens as a visitor enters the room. A camera captures video-images from the visitor, which after an abstraction are projected on the wall again. The visitor sees an graphically reduced mirror image on the wall. Myron Krueger, who is located in another room, also gets this image on a screen. He can interact with the visitor, by drawing sketches with a graphic-tablet, which get merged with the image that is shown on the projection. Krueger can interact with the visitor via the video-projection.