This video performance was produced in Owego, New York at the Experimental Television Center, using LoVid’s equipment in conjunction with the Center’s audio and video signal generators and processors. The work of LoVid (Kyle Lapidus, Tali Hinkis) explores and reveals the technical capacities the limitations of technology and glitch culture. Furthermore, both artists find the ways in which the human body and mind observe, process, and respond to both natural and technological environments and in the preservation of data, signals, and memory extremely important for their work. Recalling Woody Vasulka’s words, “video feedback [is] electronic art material. […] It’s the clay, it’s the aim, it’s the energy, it’s the stone, it’s the raw material, that you simply use, and then build an image with. […] What’s beautiful about feedback is that it’s also the junk which can generate beauty. […] [Feedback] just gives you the ability of seeing what you can expand into.” [1]

In Breaking and Entering the Lost Timeframe, LoVid seeks to preserve information and moments lost due to encoding standards of video, where time is segregated into discrete frames. The feedback of a continuous analogue signal between audio and video makes sound visible and image audible. This, in turn, simultaneously results in broken sync and sync breaking the signal. LoVid exploits this broken sync in order to enter moments which are normally inaccessible in standard encoded video.  This video is a live recording of their performance, there is no editing, yet LoVid always sets some parameters for their work. The general structure of the video performance is centred on distorting and reintroducing a motif, colour changes, rhythm, timbre and sound intensity. The signal is ofter broken by overcharging the signal, LoVid is particularly interested in surmounting the peak of the system’s capabilities, almost leading to complete break down. What we see in this video excerpt is the visualisation of information through various colours and an unbearably pleasant abundance of noise. 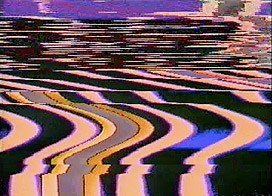 Breaking and Entering the Lost Timeframe deals with a sense of skewed temporal perception. According to LoVid, video time becomes discrete when encoded. They are particularly fascinated by this limitation since they work with both sound and video and use analogue electrical noise as a signal for both. In an interview, they state, “We hope to bring the body into this electrical landscape by challenging perception with this disconnect produced by temporally bound and unbound signal. Our sensory systems and perception have developed to deal with nature. Although there are clearly limitations to our perception (e.g. fusion frequency), video has developed to exploit these limitations. We exploit video’s limitations and until we can make something that flows like a river, we might as well use a locked canal.” [2]

Breaking and Entering the Lost Timeframe recalls Steina and Woody Vasulka’s video artworks such as Noisefields or Homemade TV (see below) where the artists created video that did not rely on the camera lens. Similarly, they used electronic signals and feedback in many of their works to generate images that exposed the internal structures of the medium of video.