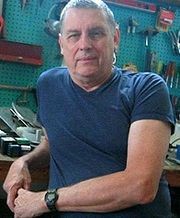 Since the mid-1960s Norman White has been producing electronic media artworks that include logic-based “machines,” robotics, and interaction. In 1967 he immigrated to Canada from the United States, drawn by the greater accessibility of materials. From 1978 to 2003 White taught at the Ontario College of Art and Design (Toronto, Ontario) where he built a program dedicated to teaching electronics, mechanics, and computer programming to artists where many of the most prominent new media artists in Canada have studied. In 1990 he was awarded the Interactive Art Prize at Ars Electronica, in 1995 the Petro-Canada Award for the Media Arts, and in 2008 the Develop Digital Art Award sponsored by the Digital Arts Museum of Berlin (Germany).

Following the purchase of his first computer in 1976, White refocused his attention on the emerging field of robotics, and during the mid- to late-1970s began making interactive machines whose internal logic expressed itself primarily through motion. Menage (1974) was White’s first robotic work, and again demonstrated his interest in exploring complex behaviours generated from simple principles. Four robots mounted upon ceiling tracks were fitted with photo-sensitive scanners and programmed to recognize and react to light sources mounted on the other robots. The machines competed for one another’s attention as they moved automatically along the overhead tracks. 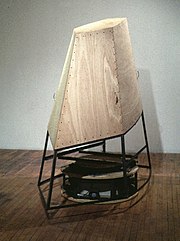 Subsequent robotic projects have included: Facing Out Laying Low (1977), a stationary interactive robot designed to react to “interesting” behaviour in the gallery space surrounding it; Funny Weather (1983), a robotic artificial weather system with interacting wind generators and sensors; Telephonic Arm Wrestling (1986). The piece enabled patrons to arm wrestle each other in the two galleries in real time. Many consider this piece to be a pioneering work in networked and long distance kinesthetic art. An early networked art piece that used telephone data links to transmit data between Canadian Cultural Centre in Paris, France and the Artculture Resource Centre, Toronto, Canada. Them Fuckin’ Robots (1988), a collaboration with Laura Kikauka investigating simulated sex; and The Helpless Robot (1987-96), a motorless kinetic sculpture designed to be an electronic dependent. In the Helpless Robot, an electronically synthesized voice asks for the physical assistance of passers-by with a persuasive tone then slowly changes to a more forceful, commanding tone, complaining when the interaction is not being completed properly. Since 1992, White has also been an essential force behind the OCAD Sumo Robot Challenge, an annual competition akin to an automaton Olympics in which robotic entries dance, paint, and bash each other to smithereens.

Currently, White teaches at Ryerson University in Toronto. A recent retrospective of this work and influence called Norm’s Robots and Machine Life, with works by White and artists he has influenced including Lois Andison, Doug Back, Peter Fleming, Simone Jones & Lance Winn, Jeff Mann and David Rokeby was shown at the Agnes Etherington Art Centre, Kingston, Ontario in 2004.