Artist Elizabeth Fuller has designed Life Dress, a garment constructed of tiled squares of dragon skin silicone with LEDs embedded inside. The tiles are then linked together in a grid which can serve as a cylindrical screen platform for countless interactive pattern displays and animations.

Fuller states, “It is a challenge to find the right interactive balance within groups of people. We can be overwhelmed if we stretch ourselves too thin. Yet, we have a fundamental need for interaction just to survive.” [1] This statement is reflected in the way the LEDs function in the dress. 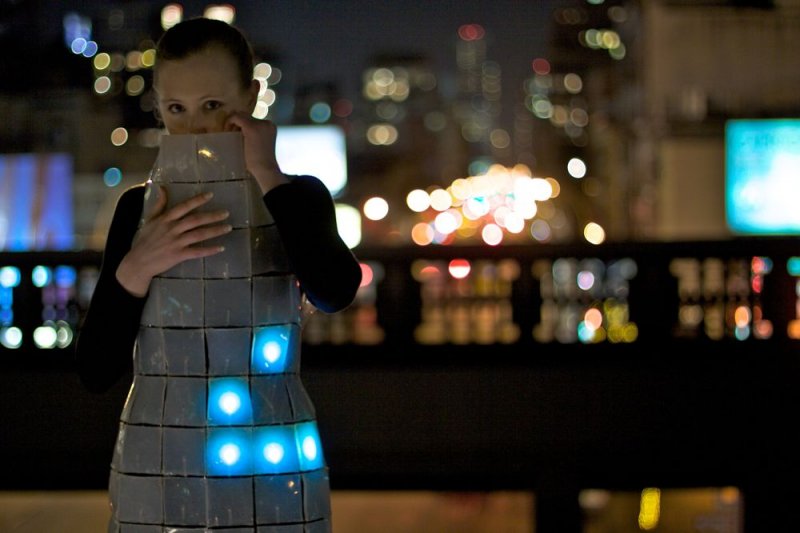 The dress has been constructed according to the grid layout and rules of John Conway’s Game of Life, where an algorithm allows a collection of cells to live, die or multiply and form various patterns. The LEDs in Fuller’s Life Dress act as cells in Conway’s cellular automaton so that the dress becomes a board that envelopes the wearer. The lights are controlled by a variety of algorithms loaded onto the Arduino microcontroller. They turn on if the cells they represent are “alive” and turn themselves off it they “die.” This is a tricky process, as a lone cell cannot survive by itself. Similarly, too many companions can overwhelm a cell. Hence, the algorithm which controls the lives of these “cells” expresses the interdependence of organisms.  Other artistic applications of the theory of “cellular autonoma” include Norman White’s First Tighten Up On the Drums (1969) and the work of boredom research.

The artist also points out that while the LEDs remain unlit, the dress is semi-transparent. Depending on what tiles are on and what tiles are off, the Life Dress can be considered an exercise in public indecency. In this context, Fuller’s dress recalls Atsuko Tanaka’s Electric Dress from 1956, a garment constructed of wires and flashing multi-coloured light bulbs. When Tanaka wore her dress at the time, it was a particularly outspoken ‘indecent’ act for a Japanese woman who was expected to avoid attracting attention. Tanaka’s Electric Dress is a daring combination of the female body and technology, a trait which Fuller’s dress shares, albeit over fifty years later. 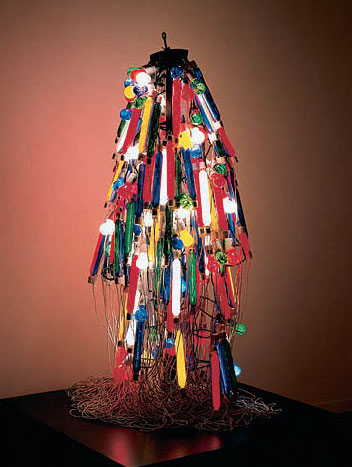 Life Dress would seem to be a typically female garment, yet it is stripped of its feminine character. It is no longer a garment made to adorn or seduce, it is a display of technology and how it both shields and reveals the female body. Programmed according to Conway’s cellular automaton, a biological process, the garment’s construction addresses “the changing political, economic and personal conditions of women’s lives due to new digital technologies.” [2] These conditions, much like the algorithm which controls the ‘lives’ of the LEDs in Fuller’s Life Dress, are also responsible for the very fragile system of the empowerment of women.