AR Magic System is an interactive system inspired by magical illusions performed by illusionists. Clara Boj and Diego Diaz, the artists behind Lalalab claim that there was an Ancient Egyptian magician who interchanged the heads of chickens and ducks and made people believe it was really magic, this was the inspiration for this work. 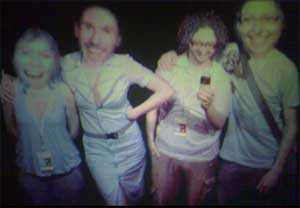 Based on an augmented reality system, AR Magic System allows users to exchange faces with their neighbours in real time by looking at themselves in a mirror-like video projection. Audiences participate enthusiastically in the augmented reality system, their interactions are intuitive. The produced effect is funny and magical; people pull rather unbecoming faces when their faces appear on their neighbour’s bodies, as if they were trying to make the rest of their neighbour’s body look silly. In an interview, the artists said, “It is really amazing how people react when they look at themselves and see another face that is smiling or talking and they cannot control the expression. It is as if somebody has supplanted your identity. For us it was a real surprise how people enjoyed this very simple idea and they played for a long time and called their friends to see how it feels to be the other. […] Almost everybody who played with the piece took a picture of their transformed face. We found dozens of those pictures on Flickr, which for us is a sign of how people enjoyed the experience.” [1]

It is a rather confusing sight, as the participants’ faces and bodies are mixed up, resulting in a sense of disembodiment. This somehow distances the participants from their sense of visual identity which then allows them to interact intuitively and freely with the other person’s body. By playing with technological simplicity, Lalalab raises complex questions about one’s sense of identity and how it is constructed.

AR Magic System recalls Paul Sermon’s artwork Telematic Dreaming (1993, see linked entry), which created a hybrid space that joins real and virtual forms of presence. Two separate beds, video cameras and a projector were connected by a telecommunications line. These were used to create a very eerie effect where a participant would lie on the bed with the projection of the other participant next to him or herself. Both AR Magic System and Telematic Dreaming challenge human perception, space and privacy through the intermingling of real and virtual forms of presence. However, AR Magic System differs from Sermon’s work by including identity in its subject matter, which heightens the sense of disembodiment and freedom in the virtual world. 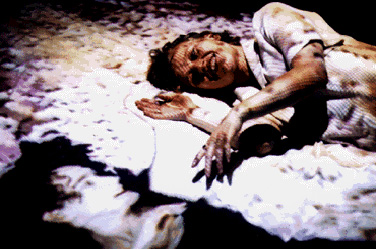 Lalalab’s augmented reality system could be seen as a visualised form of Eduardo Kac’s concept of telepresence, where, he saw “telepresence art as challenging the teleological nature of technology.” The camera is no longer used to record what stands before it, nor does the screen display what has been recorded in AR Magic System, revealing what Kac calls a “phenomenology of perception” [2] and a new form of communication with others and one’s identity.