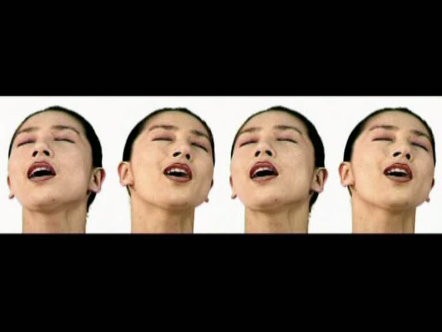 [video src=https://www.youtube.com/watch?v=ATWljMbvVTg]In Modell 5 by Granular Synthesis (Kurt Hentschläger and Ulf Langheinrich) performer Akemi Takeya tells the story of her life. The four-channel video premiered at the ICA in London in 1994, where four projections revealed Takeya's expressions moving rapidly in different directions, with her voice also synchopated algorithmically, using a technique known as "granular synthesis" by the artists. The work has been described as "one of the most beautiful experiments in bringing digital video to a theatrical setting." Audiences are amazed by how the installation animates the subject's story is simultaneously jarring and visually arresting.