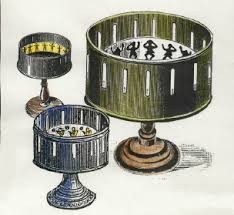 [video src=https://vimeo.com/125791075 height:200 align: right ]All Things Fall by Mat Collishaw and Sebastian Burton was first presented in 2014 during a solo exhibition titled “Black Mirror” at Galleria Borghese held in Rome [3]. The piece is powered by an electric motor and lit by numerous led lights placed all around the figurines which flash in repetition creating the illusion of motion. The zoetrope was originally designed in three dimensions. Each model figure was 3D printed at Sicnova 3D, a Spanish company specializing in 3D printing. The material used is not your average plastic found in most conventional 3D printers. Each of the figures are made from an ABS (Acrylonitrile Butadiene Styrene) material, which is a specialized hard plastic used for the prototype printer that created all of the individual components of the piece.