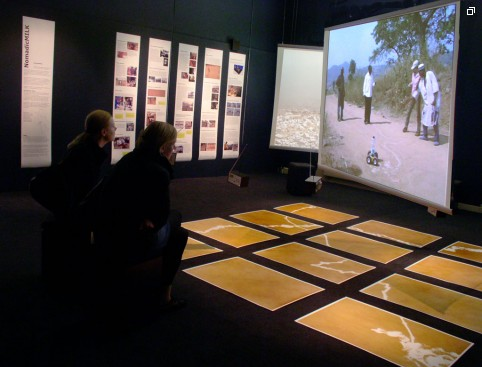 [video src= https://www.youtube.com/watch?v=tdSdGKvCvpA]Esther Polak’s art project NomadicMILK, 2009, shadows two different aspects of the dairy economy in Nigeria. Polak spent the early months of 2009 in the deserts of Nigeria following both the paths of those in charge of the production of the milk, the cow herder, and those in charge of the distribution of the milk, a truck driver. Through visual and GPS recording of both subjects, Polak’s NomadicMILK persuades the observer to redefine new relationships between the environment and technology. Polak introduced a GPS robot to the nomadic cow herders of Nigeria during her data collection. Polak remarked that she was fixated “on how people see their own tracks and how they react with that. When people see their own track, they see part of their life, part of their identity.”