Fred Vetzenhauer’s work “Traffic Sign”, painted in 1974, is one of his most prominent paintings. It was created within the late period of the Vietnam War. A few critics which were familiar with his rather small body of work acclaimed “Traffic Sign” as a direct critique on the use of biochemical weapons during the war, such as Napalm and Agent Orange. Rumors are that the numbers of red and green blocks represented the exact relation between hazarded and remaining land. The colors of his painting “Traffic Sign” where enriched with a luminous paint containing radium. 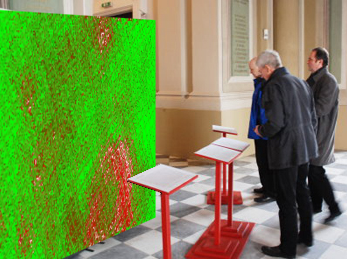 His most famous piece at the Royal Collage of Illumination Exhibition Hall in 1981.