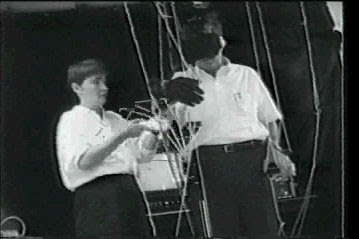 Spectral Bodies is a videotape that considers the issues at stake around simulation and subjectivity in contemporary technology. Specifically, it is concerned with virtual reality technology, which literally reads and writes our bodies. Using emerging technology, it traverses the boundaries between the imaginary and the >real= in the realm of scientific metaphor, physiological testing and the construction of our own subjectivity – of our selves. Spectral Bodies could be seen as an approach to science fiction that disrupts the metaphors we have woven around ourselves and technology. Technology is treated as instrumenting (if I can use this word), or rendering instrumental our preoccupations and desires in today's culture. As a result, this science fiction is as much a fiction of science as it is a fiction about contemporary subjectivity.

Through puzzles and short narratives, the tape describes how we may perceive a loss or change of body and, quite often along with it, a loss of personal self. The image of the body as an intimate part of perceptual and technological processes has been extended through the development of computer technological instrumentation, such as VR. The conceptual reinscription implied by this and the possibility of occupying other senses is explored in my recent works such as this one. Spectral Bodies focuses on narratives that explore one of these other senses – the sense of presence. It is a form of intimacy with our own bodies that is relatively unacknowledged in everyday life and yet enables us to function as a complex relation of parts, despite body changes. This sense is formally known as the proprioceptive sense. As a sense of presence it is, in many ways, how we know we are.

The Spectral Bodies narratives can be seen as equally fictional and 'real' testimonies to how we think we know where our senses and body boundaries begin and end. The tape begins with a reference to mid-nineteenth century scientists who discovered through the study of after-images how the corporal body is involved in the process of vision. At that time scientific activity in this area was so compelling and exhilarating that several scientists went blind experimenting with their own vision by staring directly at the sun. This new work on vision destabilized the earlier camera obscura model in which the observer was autonomous and sacrosanct. It marked a beginning: the body was seen subsequently as both influencing our perceptual process and as a site to read and to write upon.

Two stories in the tape from neurological histories poignantly testify to the loss of the sense of the body. The first is the most touching: a woman attempts to describe what it is like to completely lose, through neurological disease, any sense of where her body is at any moment in time. She is like a rag doll, incapable of motion or position. The proprioceptive sense is taken for granted to such a degree that both she and our culture lack words to describe it. It is like the body is blind, she says, it cannot see itself. This is part of the reason I play with images of blindness and sight, external and internal, throughout the tape.

We often assume our body limits are fixed, and the boundaries clear. Other stories in the tape tell how bodies can change in impossible ways, however, and very quickly. These testimonies are excerpts of physiological experiments, which I performed, creating body illusions with 'subjects'. The experiments suggest that our imaginary bodies (or are they our real bodies?) can be destabilized.

After destabilization, 'bodies' are ready to be re-mapped. A segment of interactive work then begins the process of re-representing the body as a virtual body. Working with scientists at Brandeis University in Boston and the University of Alberta in Edmonton, I combined body illusions of impossible arm and hand transformations with VR technology. A spectral hand and arm are portrayed as spectral dots and skeletal lines in a virtual environment. The VR participant recognizes this as a conventional schematic representation of his or her arm and hand. However, these initial representations of hand/arm begin to transform. The spectral arm and fingers lengthen, the palm spreads open and so on. Combined with body illusions, the participant's limb is mapped into an insect-like thing. As this mapping takes place there seems to be a physiological sense that this transformed virtual body is oneself.

VR computer technology can be approached as a kind of fiction made physical. At the same time it is a machine to create fictions of ourselves. This short excerpt of virtual reality (VR) work in the middle of the tape is one narrative among many – and one irony among others. As a whole, Spectral Bodies opens the door on the permeable and flexible mapping of the imaginary body with the material one, pointing to the role of technology as an instrument that intervenes in both the physiological and the imaginary.

Watch a video of Virtual Bodies below.