Neon artist Lili Lakich was influenced by neon roadside signs she saw while traveling with ehr military family, and began to use neon as a medium in 1973 after learning from a local sign company. Lakich uses found objects, honeycomb aluminum and assorted metals to create wall-mounted pieces such as “Self-Portrait with Spectre” (2002). Created as both a response to the September 11th attacks and the end of Lakich’s fifteen-year relationship, the lifelike portrait of the artist is superimposed against the neon outline of the spectre, who holds a flaming gun to contrast the revolving lights over the portrait’s aluminum heart. The spectre itself relates to the emblem of an AC-130 gunship that fired on a wedding in Afghanistan in 2002, killing hundred of civilians.

The emotional weight of the subject matter might seem unsuited to a medium like neon, but instead the moving lights create a subtle chiaroscuro effect on the aluminum, giving the image itself more life than it would have had, had it been a non-electronic installation. 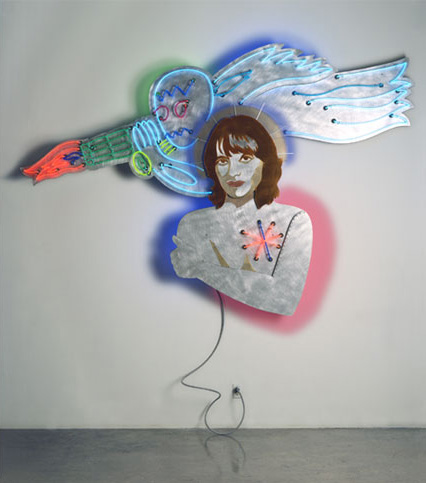