SEE BANFF! is an interactive stereoscopic installation. It bears a strong – and intentional – resemblance to an Edison kinetoscope, which made its public debut one hundred years ago in April 1894. It achieved instant popularity, but was short-lived. One and a half years later, in December 1895, the Lumiere brothers publicly exhibited projected film, and cinema as we know it was born. The kinetoscope became a transitionary symbol during a turbulent era in the media arts.

Physically, SEE BANFF! is a self-contained unit about the size of a podium, made out of walnut and brass, with a viewing hood on top and a crank on the side, as well as a selector for chosing one of the silent "views."

These views were filmed around Banff and rural Alberta in autumn 1993. They were recorded with two stop-frame 16mm film cameras mounted on a "super jogger" baby carriage. Stereoscopic recording was either triggered by an intervalometer (for timelapse) or by an encoder on one of the carriage wheels (for dollys and moviemaps). Since the filming was "stop-frame" (rather than "real-time"), time and space appear compressed.

The imagery is part of an investigation of the role of media and its relationship to landscape, tourism, and growth. Recordings were made dollying along waterfalls, glaciers, mountains, and farmland; moviemapping up and down popular natural trails; and timelapsing tourists.

SEE BANFF! looks and feel like a real kinetoscope. Turning the crank allows the user to browse back and forth, to "move through," the material. 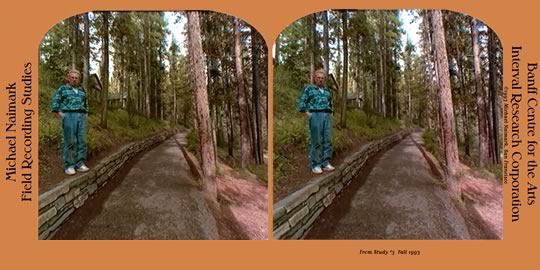