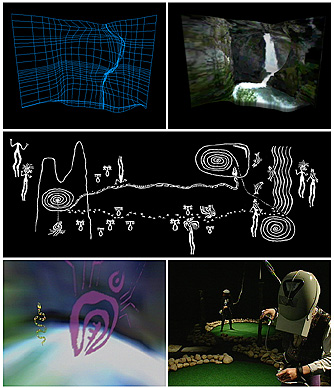 Brenda Laurel is a designer, researcher and writer. Her work focuses on interactive narrative, human-computer interaction, and cultural aspects of technology. Her career in human-computer interaction spans over twenty-five years. She holds an M.F.A. and Ph.D. in theatre from the Ohio State University. Her doctoral dissertation was the first to propose a comprehensive architecture for computer-based interactive fantasy and fiction. Brenda was one of the founding members of the research staff at Interval Research Corporation in Palo Alto, California, where she coordinated research activities exploring gender and technology, and where she co-produced and directed the Placeholder Virtual Reality project. She was also one of the founders and VP/Design of a spinoff company from Interval – Purple Moon, formed to market products based on this research. In 1990 she co-founded Telepresence Research, Inc. to develop virtual reality and remote presence technology and applications. She has worked as a software designer, producer, and researcher for companies including Atari, Activision, and Apple. She serves currently as Chair and graduate faculty member of the graduate Media Design Program at the Art Center College of Design in Pasadena, California. Brenda has published extensively on topics including interactive fiction, computer games, autonomous agents, virtual reality, and political and artistic issues in interactive media.

Placeholder was a Virtual Reality project produced by Interval Research Corporation and The Banff Centre for The Performing Arts, and directed by Brenda Laurel and Rachel Strickland, which explored a new paradigm for multi-person narrative action in virtual environments at the Banff Centre in 1992. The Placeholder archive – composed of over 600 megabytes of working papers, published reports, video clips, sounds, and retrospective comments is available on a Macintosh CD-ROM by special arrangement.