Piano as an Image Media 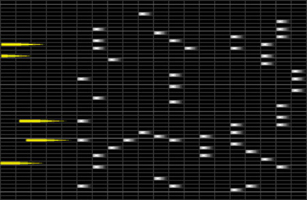 This work combines a real grand piano and computer generated moving images. A player can compose simple melodies visually using a trackball interface to position and place »dots« on a moving grid on the lower projection screen. These dots constitute a virtual score, which triggers the piano keys, which in turn project computer-generated images on the upper screen. In this way the piano itself seems to become transformed into image media – a flow of image depresses the piano’s keys, which as a consequence release yet another flight of images.

With the help of a trackball, draw a dotted line on a surface, these points go up to touch the piano keys, which in turn also emit a musical note, a visual effect with the melody line.