Underground British artist Giles Walker is no stranger to robot art. For the last 20 years, he has been creating kinetic sculptures and robots, using discarded materials found in scrap yards all over Europe. He is a member of the guerrilla-art group THE MUTOID WASTE COMPANY.

His 2007 work entitled Peepshow, exhibited for the first time at Trash City, Glastonbury Festival, has been a massive success in the underground scene.

Peepshow consists of two female ‘exotic’ robotic pole dancers, accompanied by a robotic DJ and what appears to be a drunk robotic viewer. The two females are fully animated and controlled via PC, using a DMX lighting programme. They are powered by two V12 car wiper motors, found on a scrap yard, along with the other materials.

What is rather poignant about this piece is that the heads of the two female pole dancers are not normal, humanoid robotic heads. Rather, both heads are a CCTV camera. Walker wanted to show that we are “now all living in a peepshow. Continually being watched by mechanical peeping toms on every streetcorner.” [1] Keeping this in mind, Walker wondered whether “it was possible to literally make a CCTV camera sexy using simple mechanics…and by using the imagery of a pole dance question the roles played in voyeurism.” [2]

There is a lot of criticism concerning CCTV cameras, and whether or not it is necessary to watch the public using these cameras. Like Walker said, there is something remarkably voyeuristic about these cameras: you know you are being watched but not by whom. By turning the CCTV cameras into strippers, Walker had created a role reversal. In stead of us, the public, being watched in a (perhaps sexual) way, we now watch the cameras. The cameras perform for us, are degraded by their sexual and exotic act, and we, the public, may feel like we have gained some form of leverage on these invasive cameras.

Another fascinating aspect of Walker’s Peepshow, is the movement of the strippers. The sway of their ‘hips’, the tilt of their ‘arms’, they all perfectly mimic a natural, human movement. Walker has stated that he has seen “many robots and met many robot builders and I think where mine are different are that I try to give them movements that create character and not to perform a function.” [3] Function, thus, is something Walker is not interested in. He creates robots to create robotic characters, to have those characters interact with their audience, rather than have his robots be functional things, only able of performing a predestined path. 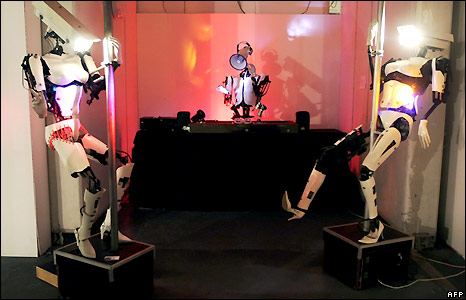 Peepshow is somewhat similar to Security by Julia [4] created by Julia Sher. Both artists have used their artworks to expose the CCTV (and general security recording systems), clearly placing them ‘out in the open’, by deliberately using them in the wrong context. As Shanken said, “Sher can make the technologies of an otherwise closed and private system accessible to the public, opening up a space to question the widespread use of these same technologies in modern society.” [5] Peepshow by Walker enables an audience to question the use of CCTV as well, opening up the debate by placing them in such an erotic and racy environment.

But why would Walker use robots to expose the CCTV? Eduardo Kac states that “[r]obots make room for social criticism, personal concerns, and the free play of imagination and fantasy.” [6] By using his pole dancer robots, Walker opens up a space for debate and deliberation, one that seems to be available to robots only.