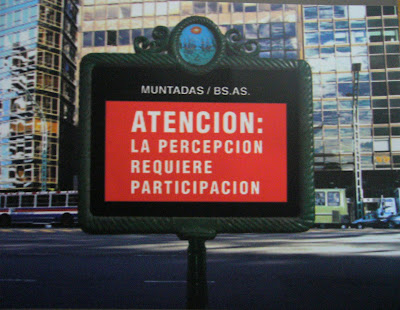 Antoni Muntadas was born in Barcelona, and now lives and works in New York. His work addresses social, political and communications issues, particularly the relationship between public and private space. He explores the distribution and delivery of information and censorship. He works with a variety of mediums and has projects that work with photography, video, publications, web based work, installations and urban space.

On Translation is a multimedia, transnational initiative made up of a series of installations, interventions, websites, public projects, objects, videos, conferences, texts and publications. This work by Antoni Muntadas takes many forms, and is spread out over time and geographic region. One installment of this work was titled The Games, presented in 1996, which examined the exchange of national values and symbols at the Olympic Games. Another installment of On Translation is titled The Internet Project, 1997, this part of the work showed the translation of one sentence through 23 different languages, http://www.adaweb.com/influx/muntadas/. Another installment of this work was at a New York bank in1998 and dealt with the currency trade in the world of international finance. Another facet of this project are stickers that say “perception requires involvement” in various languages. He also looks at the Museum and how this institution affects the translation and interpretation of art.

Muntadas says that he is especially interested in “filters, physical wrappings of exchange which operate between audience and cultural artifact: cultural institutions, architecture, and the media.” Muntadas compares the process of art from start to public presentation as similar to the process of translation. He goal in this project is to bring attention to the fact that information is lost in translation, skewed and or misconstrued. Information has the ability to take on its own life and communication is far from a perfect science. Context and perception come into play and affect understanding. Part of the ongoing project On Translation is that Muntadas explores the way that translation does not only deal with language. The filter, context, location, etc. all affect translation.