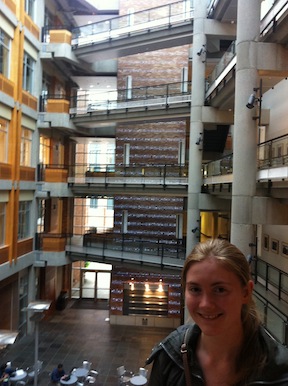 "Nocturnal Flow" is an installation created by artist Erwin Redl, who has done a number of similar pieces around the world involving LED lights. [1] Nocturnal Flow is housed in the atrium of the University of Washington's Paul G. Allen Center and consists of a grid of 17,400 LED lights, which cover the 85-foot brick column at one end of the atrium. [2] Erwin Redl is quoted to have said that his piece "emphasizes the vertical dimension of the building's atrium…The installation uses this wall to create an enormous plane of light that conceptually links the different floors of the building." [3] The lights of the piece also respond directly to the outside environment by pulsating more strongly the less light it detects.

While visiting the piece, I noticed first-hand how unifying the piece was within the space it occupies. It covers the entire column, reaching floor to ceiling, and is impressive to see. Just in the time that my classmates and I were there, we noticed a perceptive change in the intensity of the pulses, related to the amount of light outside at the time. My classmates and I also discussed the possible meanings of the title in relation to better understanding the piece. We concluded that "nocturnal" is a reference to the fact that the pulses are at their most intense at night when there is a lack of natural light. The "flow" part of the title was a more interesting question. Personally, I relate the word to the flow of water, but interestingly, the flow in this piece is upwards, against gravity. We had some discussion of how it could possibly refer to the flow of information or how the pulses could be interpreted as radio (or other) waves that lessened in intensity the further from the source they went. (Which was what seemed to occur on the wall the closer the waves got to the ceiling and more natural light.) We also considered that the upward motion emphasized the height of the column better than a downward flow would have, perhaps because the upward motion suggested an upward push again gravity. We thought that the pieces would be particularly impressive at night, without the natural light from the glass ceiling, when the piece could be very clearly seen and be the only real light source that still showed the entire height of the room.

I believe a parallel can be drawn between "Virtual Mirror – Rain" by Tao Sambolec [4] and "Nocturnal Flow." Virtual Mirror – Rain takes in the precipitation data of the outside environment and uses light to respond to the data in an inside environment. [5] Similarly, Nocturnal Flow senses the amount of light in the environment and reflects that data in the LED light grid on the column. Both use light to reflect a measurable element in the environment in an artistic way. Also, both send the reflected light back toward the sky, where the data originally comes from. (Rain and light.) I think both show a very interesting way of bringing attention to the outside environment and natural phenomena in a very subtle way.

A key aspect to the success of both of these pieces is the medium of light. As Laszlo Moholy-Nagy states in The New Vision, "light – as time-spatial energy and its projection – is an outstanding aid in propelling kinetic sculpture, and in attaining virtual volume." [6] This is certainly true for Nocturnal flow for, while observing the installation, we noticed that the lights were not really distracting and were actually pretty calming to look at, despite the fact that they could be pulsing quite quickly. The upward, kinetic movement of the piece is only implied motion of course, and is successful because of the optical illusion provided through the medium of light, which creates an dynamic piece of art on what would have otherwise been a very tall but rather uninteresting, static brick wall.

This idea of implied motion and volume is one that artists have always been intrigued by. Contemporary artists like James Turrell and Erwin Redl have had great success in using light as a medium to imply not only movement but also volume in a space. Erwin Redl captures both these concepts not only in Nocturnal Flow but in all of his similar LED projects where the pulsation of light provides the "motion," which in it's movement implies a volume and space. I think Nocturnal Flow was very well done and is fittingly incorporated into the space in which it is housed. It's very neat that there is such a great example of this kind of art on the UW campus.