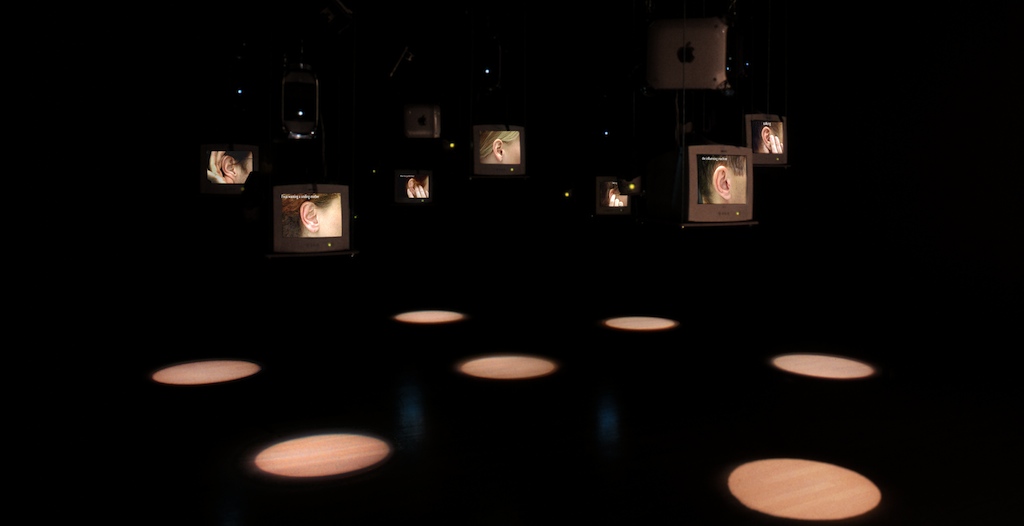 The surface inspiration for n-Cha(n)t was a strong and somewhat inexplicable desire to hear a community of computers speaking together: chattering amongst themselves, musing, intoning chants… It is probably significant that my father is a retired Anglican minister, and that I spent many Sundays in my youth fascinated by the subtle shiftings of voices speaking in unison… the sudden sibilance of shared s’s… the slight variations with words forgotten or older versions preferred.

So n-cha(n)t is a community of “Givers of Names” linked by a network. They intercommunicate, and through doing so, ‘synchronize’ their individual internal ‘states of mind’. When left uninterrupted to communicate amongth themselves, they eventually fall into chanting, a shared stream of verbal association. This consensus unfolds very organically. The systems feel their way towards each other, finding resonance in synonyms and similar sounding words, working through different formulations of similar statements until finally achieving unison.

Each entity is equipped with a highly focussed microphone and voice recognition software. When a gallery visitor speaks into one of the microphones, these words from the outside “distract” that system, stimulating a shift in that entity’s ‘state of mind’. As a result, that individual falls away from the chant. As it begins communicating this new input to its nearest neighbours, the community chanting loses its coherence, with the chanting veering towards a party-like chaos of voices. In the absence of further disruptions, the intercommunications reinforce the similarities and draw the community back to the chant.