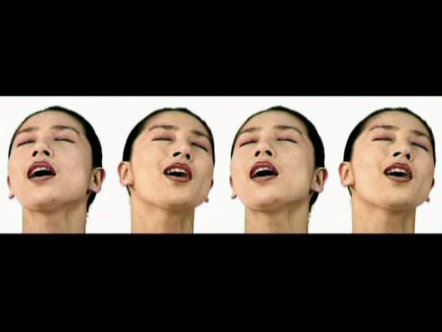 [1] The Modell 5 is a virtual artwork in which the performer, Akemi Takeya, makes different facial expressions while telling the story of her life. The exhibit was shown at the ICA in London in 1994, which shows four separated videos of herself performing different expressionistic traits moving rapidly in different directions. Within the AEM reading it states that, [2] "… has been described as one of the most beautiful experiments in bringing digital video to a theatrical setting." (110) which it is true in some way. Many people go and visit this piece, not knowning what to expect when they first look at the video, and later the audiences are being amazed on how much the artwork is telling of the subjects story.

The different facial expressions by the actress shows the artwork more visually astonishing to the audience; we see her as more of a cyborg rather than a human being because of those fast repetition cut. The sound of the exhibit also shows the cybernetic side of the artwork which makes it feel as though the recording of the artwork has been damaged, but in reality this is the purpose of the piece. It can also appear her being first as a human, then later being converted as a robotic human being. From this artwork, she shows different signs of despair, happiness, anger, fearful, and curiosity. When you first look at the video below, at first you get a small sensation of what the idea of this piece really is, but later it jumps right in front of you in a blink of an eye and you kind of wonder why she did this in the first place. We could see this artwork as us as human beings in the future where technology has take over our life and even our bodies where we might have even modified ourself, and this representation of it has us short-circuiting which we do not want to follow that path. But I feel that we are following that path because since technology is such an exponential area, people are wanting to be part of that area and as advance as technology is being. We have seen some of these examples from different variety of films that has been living in the life of the technological world and being exposed to such blindness of the real world. One example would be the film IRobot where they are living in the technological era and robots are taken over the world. The main character, played by Will Smith, has a bionic arm which he got from an accident from losing his real arm. These modification could lead us to living a better life, or make it worse as the artwork is showing.