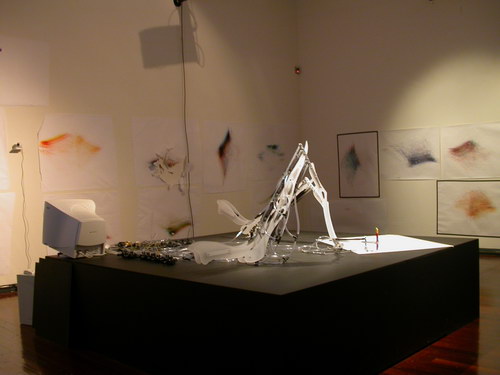 “MEART – The Semi Living Artist” is a geographically detached, bio-cybernetic research and development project exploring aspects of creativity and artistry in the age of new biological technologies.

It was developed and hosted by SymbioticA – The Art & Science Collaborative Research Lab, University of Western Australia.

MEART is an installation distributed between two (or more) locations in the world. Its “brain” consists of cultured nerve cells that grow and live in a neuro-engineering lab, in Georgia institute of Technology, Atlanta, USA (Dr. Steve Potter’s lab). Its “body” is a robotic drawing arm that is capable of producing two-dimensional drawings. The “brain” and the “body” will communicate in real time with each other for the duration of the exhibition.

MEART is suggesting future scenarios where humans will create/grow/manufacture intuitive and creative “thinking entities” that could be intelligent and unpredictable beings. They may be created by humans for anthropocentric use, but as they will be creative and unpredictable they might not necessarily stay the way they were originally intended.

We refer to the wetware/software/hardware hybrid we have created as a Semi-Living artist as it is made of both living and artificial components; part grown – part constructed. While the artistic values of the outcomes of the process (the marks on paper left by the drawing arm) are still in the eye of the beholder, the questions regarding the possibilities are real. What will happen when such a system starts to express qualities that are considered uniquely human aptitudes such as art? Its identity extends beyond our cultural comprehension of living systems. Made from living biological matter, mechanics and electronics simultaneously, it questions the viewer’s perceptions of the concept of sentience.

MEART has a technologically created identity. It is an identity created as aresult of the progression and combination of various technologies. Its“brain” is growing in Atlanta and its “body” (or multi bodies) could be anywhere in the world thus highlighting the ubiquitous nature of its existence and identity.

This work explores questions such as: What is creativity? What creates value in art? One way of looking at these issues might be by thinking about creativity along a spectrum, from a reductionist mechanical device, to an artistic genius. What is it that makes a person a genius? Perhaps it is the ability to link together diverse inputs. We hope that our cultured neurons will have the potential to show signs of very basic “learning” or “creativity”.

We have set up living neural cultures (“MEART’s Brain”) in Dr. Steve Potter’s lab at Georgia Institute of Technology, Atlanta. Potter is one of the leading neuroscientists in the field of “Learning in Vitro” and is developing a new paradigm for neurobiology research. He is applying different technologies to study dissociated cultures of hundreds or thousands of mammalian neurons.

Experiments are performed in order to explore the relationships between the input/stimulation to the neuronal culture and the output/drawings.

Thispiece traces its influences from an array of artistic, scientific and technological streams. Areas such as interactive art, cybernetics, kinetic and robotic art, artificial life/intelligence and biology are all linked to the project. Other influences are the different representations and use of animals in contemporary arts, from the use of elephants to produce “art” to the use of living and recently living animals/bodies (or parts of the body) as art works.

From an historical context, artists have always been concerned with imitating life and with giving life/animating qualities to non-living entities. Technology has also joined forces with art forms to create more sophisticated types of artificial life systems and “intelligent” machines. The uniqueness of MEART is the attempt to create an intelligent artificial/biological artist that has in itself the capability or potential to be creative. We are focusing on creating the artist rather than the artwork. MEART proposes to embody the fusion of biology and the machine – creativity emerging from a semi-living entity.