MATRIX II was created by Erwin Redl. He has investigated the term ‘reverse engineering’ since 1997 by (re-)translating the abstract aesthetic language of virtual reality and 3-D computer modelling back into an architectural environment with the help of large-scale light installations. Space, experienced as a second skin, is transformed by the artist. Also, “due to the very nature of its architectural dimension, participating by simply being “present” is an integral part of the installations. Visual perception has to work in conjunction with corporeal motion, and the passage of time, an additional parameter of motion.The formal aspect of the works is easily accessible. An interpretation and understanding of this aspect is dependent upon the viewer’s subjective references. Equally, the various individual’s interactions within the context of the installation re-shape each viewer’s subjective references and reveal a complex social phenomenon.” [1]

MATRIX II is a room-size work that offers its vistors a space that seems to go on in all directions, as if the walls were mirrored. Floor-to-ceiling and wall-to-wall, the room is filled with grids of phosphor green LEDs, creating an immersive web of light. [2] It gives the visitor a very disoriented feeling as the light seem to flow directly through your body. Then another piece comes to mind with this. It might not look very similar, but the way the green lights of MATRIX II lights up, makes it seem like lasers, even though they are just very bright lights. Therefore, a resemblance with Day Passage from Rockne Krebs can be made. Day Passage was an installation specifically made for in an interior space in which the lasers showed magnificent multicolored lights. [3] MATRIX II however only shows a very bright green.

The Asociación Arte Concreto Invención wrote in their Inventionist Manifesto that “man is becoming less and less sensittive to illusory images. (…) Scientific aethetics will replace the age-old speculative, idealistic aethetics.” [4] This is good news for Redl as his work almost requires binary logic. That is because he assembles the material according to a narrow set of self-imposed rules which often incorporate algorithms, controlled randomness and other methods inspired by computer code. [5] Although MATRIX II does not seem to be linked with computer codes, there is a rigid aesthetic to the installation, that resembles a structural code. 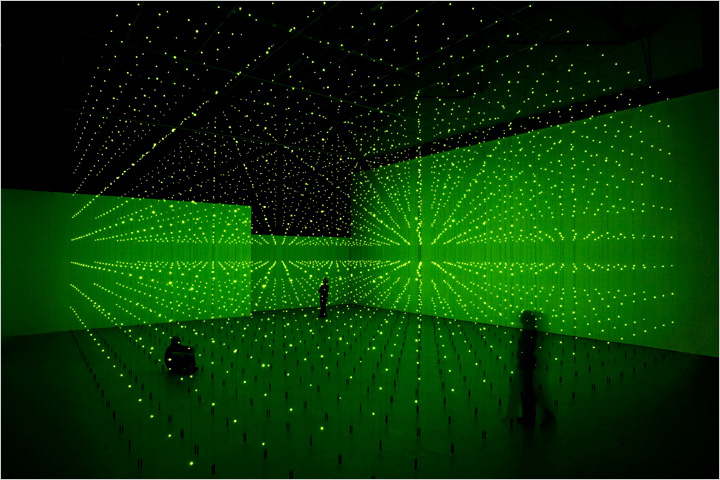