Beginning in the early 20th century, artists and philosophers began to challenge the well-defined line that had been previously drawn between an artist and their audience. These thinkers included creatives such as Marcel Duchamp, who expressed his belief that in art, the work is not whole without active participation from the spectator, that “the spectator brings the work in contact with the external world…and thus adds his contribution to the creative act.” [2]  Bruce Nauman’s 1970 closed-loop video work Live-Taped Video Corridor engages its audience in a fairly straightforward way; by allowing them to track their own movements through a well-defined space in real time, but with certain spatial contortions. 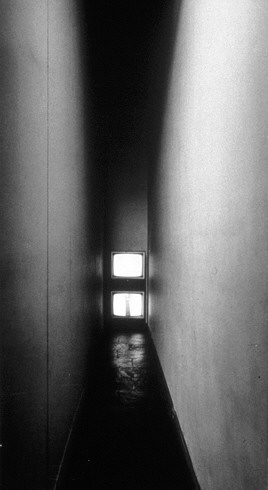 Live-Taped Video Corridor consists of two monitors installed on the floor at the end of a vertically elongated hallway, with a ceiling-mounted camera above the entrance to the installation. The bottom monitor displays a pre-shot loop of the corridor with no one inside, while the top monitor displays the movement of the participant in real-time. Due to both physical and perceptual aspects, the work exudes a sense of claustrophobia. The primary and most obvious factor that contributes to this is the constrictive nature of the physical space itself. The corridor is extremely narrow, preventing lateral movement, and thus restricts the participant to two directions: “in” or “out”.  However, the image on the video monitors serve to compound the claustrophobic tone of the work. Due to the fact that the mounted camera is above the entrance, as observers moves towards the monitors to track their movement, their figures become smaller and smaller, seemingly disappearing down the monolithic corridor. Furthermore, due to the positioning of the camera, it is only possible to see one’s own back. This distances the participant from their own actions, making them feel helpless to the visual dissonance that Nauman has introduced.

Though the work on the whole is pure in its translation of movement to video (that is to say that Nauman does not warp or pervert the footage between its capture and its display), Live-Taped Video Corridor aims to scramble the observer’s perception of their movement. The projected images are counter-intuitive; the viewers’ attempts to see themselves only makes that task all the more difficult. The impossibility of facing forward on the monitor makes them question their own presence in the corridor. In this way, Nauman’s work serves as a distortion of the principle of technology as a mirror, as explained by David Rokeby. Rokeby states that the true purpose of an interactive technology is to work as a mirror, allowing the audience to communicate with themselves. He elaborates that interactive technologies “reflect our desire to feel engaged.” [4] Though it cannot be denied that this work engages its audience, it deliberately fails to act as a two-way mirror. Instead of providing an outlet for self-reflection, the work hinders clarity and the participant “slips into the role of someone monitoring their own activities.” [3] This deorients the observer and forces them into a sense of surveillance. In a way, Live-Taped Video Corridor functions as a dislocating device between motion and intent. Because of the backward orientation of the camera and monitors, the physical motive (the desire to either "get closer" or "move away") and the eventual resulting image on the monitor are opposite to one another. This phenomenon disrupts participants' sense of self-reflection, promoting the feeling of "watching" over "doing." David Rokeby defined a interactive technological mirror to be a "medium through which we communicate with ourselves." [4] Though it may seem like Nauman is perverting this ideal of self-communication through the spatial trickery present in his installation, such a dialgoue is still possible. However, instead of speaking to one's self face-to-face, as if standing in front of a two-way mirror, Nauman's work facilitates an exchange similar to that of a one-way mirror, where the selves are disconnected. This ultimately makes the participants feel powerless in the installation, as they can act only as monitors.

When looked at as an artistic whole, Live-Taped Video Corridor represents a work that is not simply participatory in nature, but completely reliant on the activity of its observers. The bottom monitor on the floor of the hallway serves to show Nauman’s awareness of this very fact. This monitor, which displays an endless videotape loop of the empty corridor (though it could be a still photograph and the difference would be indiscernable), acts as a sort of “negative control group” for the installation. It displays what the artwork is without the introduction of the human element: an empty hallway with two monitors on the floor. The inclusion of this “control group” by Nauman is his acknowledgment of his reliance on an active audience for this particular work. In a slightly ironic twist, it’s the movement and behavior patterns of the audience that perpetuate the unsettling nature of the work. There’s nothing inherently suspenseful about a corridor with two monitors at the end (though the interior design may be suspect). However, once the human element is introduced, the movement toward and away from the camera creates the images on the top monitor at the end of the hallway. The audience’s viewing of the monitor image in turn induces an emotional response that further affects their movement patterns. This cycle continues until the participant decides to exit the corridor. In short, there is a self-perpetuating cycle of movement inducing emotion inducing movement, and so on. At any time, an active audience member could revert back to a conventional observer by stopping in their tracks and averting their eyes from the monitors.  However, most people tend to be too curious to break the cycle. 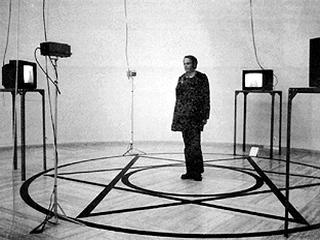 Just as Bruce Nauman explores the distancing of individuals from their own movement, Peter Weibel examines the limits of self-alienation in his work Observation of the Observation: Uncertainty. This video installation involves participants standing in the center of a circle with three video monitors and cameras spaced equidistant along the perimeter. As the participants turn to each of the monitors in an attempt to view themselves from the front, they find that to be impossible. Both Nauman and Weibel’s works involve the viewing of self, but Weibel’s pushes the concept of self-surveillance to an even further extreme by imposing harsher spatial restriction on the participant. While Nauman’s Live-Taped Video Corridor operates along a gradient of “in” and “out”, representing the observer’s movement along the axis of the hallway, Weibel’s work has only one “point” where the participant can be; the center of the circle. Because of this, the images displayed are much less dynamic than those in Nauman’s work, all are shot at the same distance and at roughly the same angle. This reinforces the theme of surveillance as the participant is constantly “experiencing the piece as being observed and never as observer.” [5] In this way, Observation of the Observation: Uncertainty is an exercise in futility, examining how long an audience will attempt to see themselves before resigning to being an image rather than a viewer.

Image for Weibel's work from: Observation of the Observation: Uncertainty

One reply on “Live-Taped Video Corridor”

Another great entry Mencius.
Another great entry Mencius. Without reading too much into the piece, which is notably straightforward (and probably most significant for its experience of visual dislocation and claustrophobia – already mentioned) Im interested in an elaboration perhaps of the idea of the mirror and how that might be seen in the Nauman work. It’s a little hard for me to think of ‘audience participation’ as the main point of Nauman’s work since there are many, many other examples that fit the bill. I know at this point there is little to riff off on, but maybe one could think of visual dislocation which is a good concept for simulacrums (a little further ahead in the quarter) or even a new creative behaviour that arises from new ways of thinking through technology. Nauman was a big experimener in his studio and a lot of his video works are actually documentations of his ‘creative behaviours’.. Otherwise i like the comparison with Weibel’s work, and how you’ve put that together elegantly. I would say trim down on the introduction a little and perhaps let the quotes do their work in the main content of the entry. a little trimming and a little beefing up and you’ll have the perfect entry.