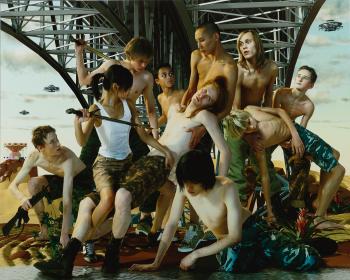 Enthusiastically received at this year’s Venice Biennale (Russian Pavilion), Last Riot 2 presents the viewer with a world of fantasy landscape mutated and frozen in time. Inspired by the work of Baroque masters such as Caravaggio, AES+F explore contemporary heroism in an era when everything, including war, is sanitized. The heroes of the “Last Riot” are androgynous teenagers; existing in an animated virtual world where they are devoid of judgment and ideology.

In this new world, even real war appears to work as a video game; paradisiacal and cataclysmic images exist as one, no difference can be discerned between victim and aggressor; no pain or blood is evident. In a landscape that varies from arctic to desert to mountainous, scattered with everything from pagodas and chalets to Ferris wheels and palm trees, AES+F’s Heroes rumble with knives, swords and clubs, battering and cutting each other but never actually making contact. Behind them all eras collide: 1930s aircraft, futuristic monorails and tanks from World War I create a perverse Modernist fantasia.

Formed in 1987 as AES, the group originally consisted of the three members Tatiana Arzamasova, Lev Evzovich, and Evgeny Svyatsky. They were joined in 1995 by Vladimir Fridkes, transforming into AES+F. The faceless, corporate styling of the group’s moniker and the collaborative efforts that subsume individual concerns into a group identity have created an environment in which a project can avoid issues of personal history and focus on a critical engagement with contemporary society.