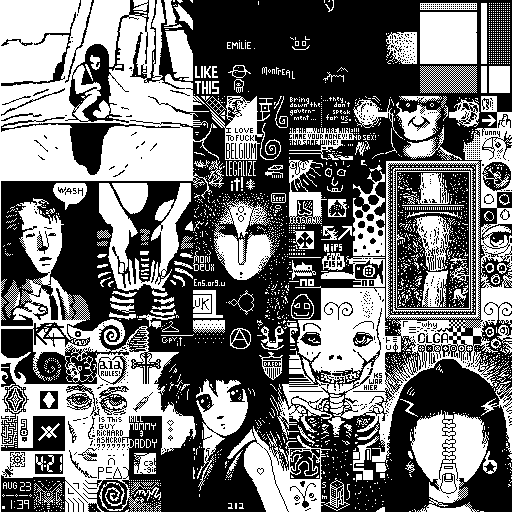 Click on the image to participate in the interactive drawing.

“Glyphiti is an image composed of many smaller “glyphs” that can be edited easily. The qualities of the image are co-determined. As author, I have established certain characteristics. These include the size and available colors, which are black and white. But the state of every pixel can be changed by the visiting artist.”

“Users of Andy Deck’s Glyphiti applet are invited to engage in the collaborative editing of a mural, composed of 256 icon sized images (glyphs) by working on one 32 x 32 pixel section at a time. Black and white, zoomed in tight, Glyphiti feels like the dysfunctional amalgamation of familiar interface features from antiquated image editing software. The anonymous crowd of users are allowed to scrawl over each other’s glyphs like bored schoolchildren carving expletives into classroom desks.”

The source code is available at: http://artcontext.net/act/01/glyphiti/src/.

Furthermore, the website allows access to timelapse recordings of the crowd-activity on GLYPHITI. An interesting period to look at are the months July, August and September of 2003. Alternatively, there is a list of all recordings.

Deck later produced other pieces that build upon the ideas behind GLYPHITI. One example is ‘Screening Circle’, as described by TATE (http://www2.tate.org.uk/intermediaart/entry15384.shtm). The interactive version is also available on Deck’s website: http://artcontext.org/act/05/screeningCircle/.