DesResFX.Kill (Karma Physics < Elvis) is a self playing modification of the science fiction first person shooter computer game engine Unreal Tournament 2003. When plugged into a projector/monitor and power, a small custom computer starts and displays the work. The viewer is pulled slowly through an endless chasm of pink fog filled with countless floating, flailing bodies of Elvis Presley. The representations of Elvis are appropriated archetypes that represent a certain type of character; they are empty shells that one can inhabit during a video game. 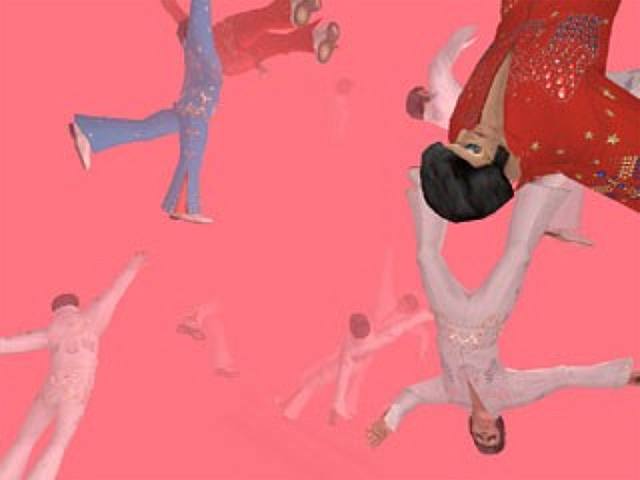 The choice of pink background and the use of Presley’s image imbue the artwork with a rather humorous quality. The artist’s sense of humour seems rather dark when the observers discover that the convulsions of Elvis are controlled by the original game’s Karma real-time physics system – a type of procedural animation that applies real-world physics to video games, especially when re-enacting death animations. Movements are calculated at the moment they are executed, enabling the video game character to interact more naturally with its virtual environment. The “reality” of the game is not predetermined when using karma physics; the player alters it through his or her imagination’s comprehension of the virtual environment. Condon states that he misuses karma physics as a “new representation of death via code, not just the visual surface of trauma, but the physical dynamics of the falling figure.” [1] DesResFX.Kill (Karma Physics < Elvis) seems even darker in its subject matter when one realises that the artist is keeping the allegedly immortal ‘King of Rock ‘n Roll’ doing the eternal ‘dance of death’ in his artwork. This realisation is striking in both its gravity and lightness, as death is seem to be traumatic, yet one realises that millions of game characters ‘lose their lives’ daily. Death is reduced to a simple, repetitive action on a pink background in the virtual world.

Just as Condon used the Unreal Tournament 2003 gaming engine to create endless simulations of death (which jarringly contrast with his game environment and character choice), Mary Flanagan used the same technology in her work [domestic] where the 3D computer environment simulates memory and spaces in a house fire. It is another traumatic subject which raises questions about re-experiencing memories in the virtual world and how computer games create meaning.