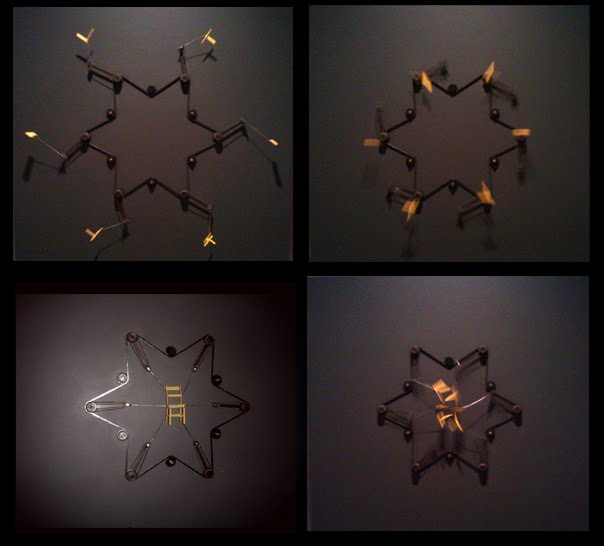 Cory’s Yellow Chair is a kinetic sculpture by Arthur Ganson that assembles, disassembles, and reconstructs a small, four-and-a-half-inch tall yellow chair indefinitely.  Ganson says he got inspiration for this piece when his “son’s little yellow chair explode with infinite speed, travel to the far reaches of the universe and slowly come to complete stillness. Then, beginning to collapse slowly at first, they reached infinite speed at the moment of becoming a complete chair again. They stopped instantaneously, for just a fleeting moment, and then exploded!” [1]

The piece, driven by a few small gears and belts with a driving motor hidden behind never stops, but somehow allows the chair to stay in completed form for a second before it explodes again, leaving for a bit of suspense whether or not the mechanism will keep going or not.  According to Sculpture.org, “Ganson recognizes the comic yet poignant quality of chairs.” [2] Cory’s Yellow Chair is not the only piece by Ganson that involves a chair getting moved around and such.  His large machine called Machine with Chair [3] rolls over to a single chair on the ground and picks it up, lifts it high in the air, spins it around, then places it right back down in the exact spot it was in before. Ganson’s smaller piece, titled Thinking Chair is another tiny yellow chair that stands up on its legs and wobbles about over a floating rock.

Ganson’s sculptures are very similar to Metzger’s installations of auto-destructive and auto-creative art [4], although Ganson’s works do both the destruction and creation in the same piece, allowing for a creation that lasts longer than just one demonstration.

One reply on “Cory’s Yellow Chair”

I’ve seen a number of similar
I’ve seen a number of similar kinetic sculptures and what’s struck me about all of them is how often chairs appear. The beauty of kinetic artwork is in how lively and exciting it is compared to traditional sculpture. The motion of the piece is its ascetic center piece and it’s absolutely wondrous to watch chair form and dissipate like clockwork.

I also find it interesting that the artist chose to display the functional parts of this sculpture. There is no mystery about the inner workings of Cory’s Yellow Chair but I think the motion of the arms and gears positively accentuates the rest of the piece. It makes the sculpture feel more accessible and less mysterious, and I enjoy that.