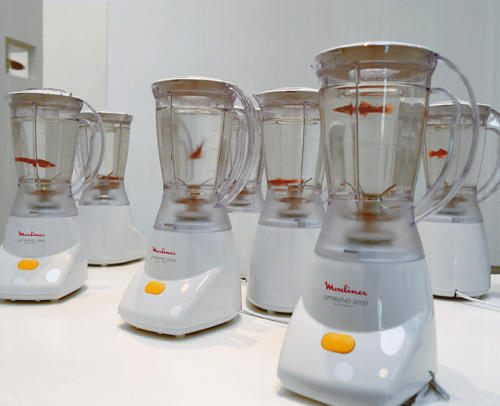 “Ten white Moulinex Optiblend 2000 mixers were placed on a simple table. Each of these was filled with water and contained a live goldfish. The mixers were visibly plugged in and thus ready to use. Anyone pressing the yellow button would thereby kill the fish. The visitors thus became the judges of life or death.  An hour after one of the visitors had pressed one of the buttons, the police would enter and order the electricity to be cut off. Meyer was charged with animal cruelty and fined 2000 Danish Crowns, upon which he appealed. During the following laborious trial expert witnesses were called to provide evidence on the way in which the fish were killed, ultimately establishing that, in contrast to customary methods, the short duration of the killing of maximum one second was one of the more humane methods. On May 19th 2003 the BBC reported Meyers acquittal with the headline “Liquidising goldfish not a crime”: … But a court in Denmark has now ruled that the fish were not treated cruelly, as they had not faced prolonged suffering. The fish were killed instantly and humanely, said Judge Preben Bagger.  The show trial in the service of the freedom of art reached its conclusion. Did Evaristti calculate in the factor of media reaction right from the outset? Was the killing of one or more fish his intention? Was the trial part of the art project?

Evaristti did not in any way encourage the visitors to kill the fish, but left the decision to them.  According to eyewitnesses, the killing of the first fish created a charged atmosphere among the numerous media representatives who were present who virtually encouraged the visitors to press the button in order to initiate a scandal  something they ultimately achieved.  The public followed Evaristtis division of society into three groups: the idiot, who pres-ses the button [the sadist], the voyeur who loves to watch, and the moraliser. […] The media and the public were the voyeurs and the animal protection groups and those others who protested were the moralists.  The artist sees his installation as a social experiment in which he tries to interpret reality through reality, and not through a lie. Evaristti distances himself in this way from the representa-tion of horror in the sense of the classical art term, since he considers the interpretation of what happened as a falsification of reality.” 1.

The given option to “transform the content into fishsoup”, as one a reporter put it, shook up a lot of people and got a lot of media attention. In an internet poll conducted by the CNN, 72% (which were 30,592 votes) thought this was definitely not art. Unexpectedly, Helena was defended by animal rights philosopher Peter Singer, argueing that the given option of turning the blender on, raises the question of the power humans have over animals. 2.

Another artwork that raises questions on the power humans have and exercise is Eduardo Kac’s Genesis, fosussing on the ethics of DNA manipulation. Kac displayed a text from the biblical Genesis accrediting humanity dominion over its environment, thereby helping the audience to consciously think about the intended subject. Evaistti did not help his audience to understand the intention he had when creating Helena, possibly this was one of the causes for its misunderstanding.

This artwork helps to disclose the effects of interconnections between technology, desire and ethics on the ‘use’ of animals. SubRosa has a similar goal, but these activists conflict for equality of men and women (AEM 253). In a sense, animals and women can be equated to the extend that they are both minority groups, put in a disadvantaged position by discourses deeply embedded in our culture. The sad part is that the animals are unable to speak up for their rights.

The video below shows a commercial for the Aarhus Museum, one of the museums where Helena was diplayed.